Offered to owners of micro and small enterprises who are interested in improving their businesses. Business loan can be used for working capital, fixed assets or business facility improvements.

The home improvement loan is offered to home owners with fixed income to carry substantial improvements to the house, such as painting, retiling, or even adding a room to the house.

Offered only to existing loyal customers who have renewed their loan with CHF Iraq for the 4th time and above. The Consumer loans may be used for any personal purposes.

This loan is intended to provide support to a new customer segment: young people with special needs. The loan will enable them to integrate in the community and generate their own income.

Since 2003, CHF Vitas Iraq have had the privilege of serving the communities of Iraq by offering financial services for the owners of micro and small businesses enabling them to increase their income.

Mrs. Shaareya is a resident of Erbil governorate and owns a beauty salon in Mufti area. She wanted to grow her business and renovate the salon

Nofal is a 40-year-old, strong-willed man, married and helping three members of his family

Jennar is a 27-year-old woman from Sulaymaniyah, who is married and has one child. She works as a hairdresser for women from her home 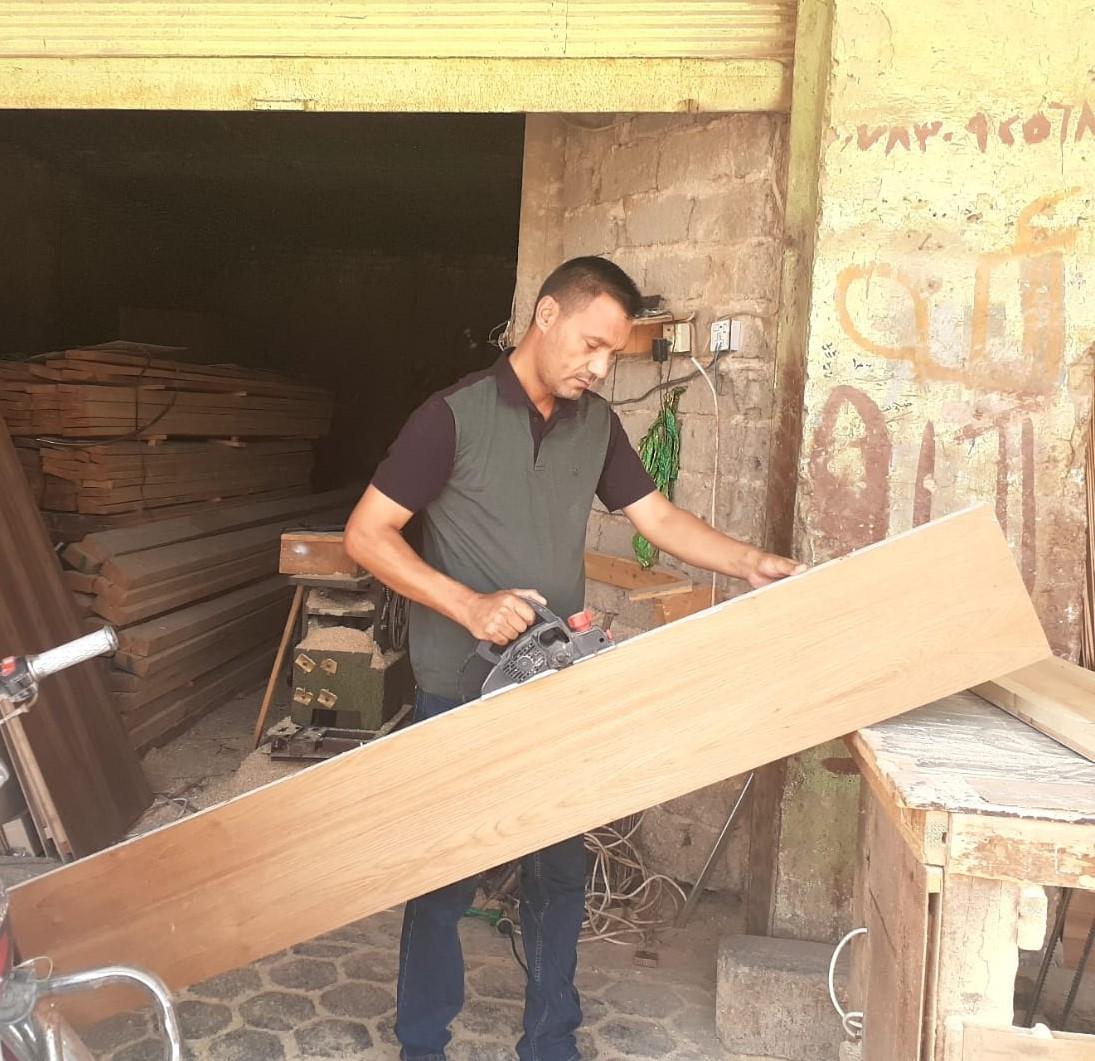 Bassam owns a small carpentry factory since 2010. He needed funding to develop his business in 2015. 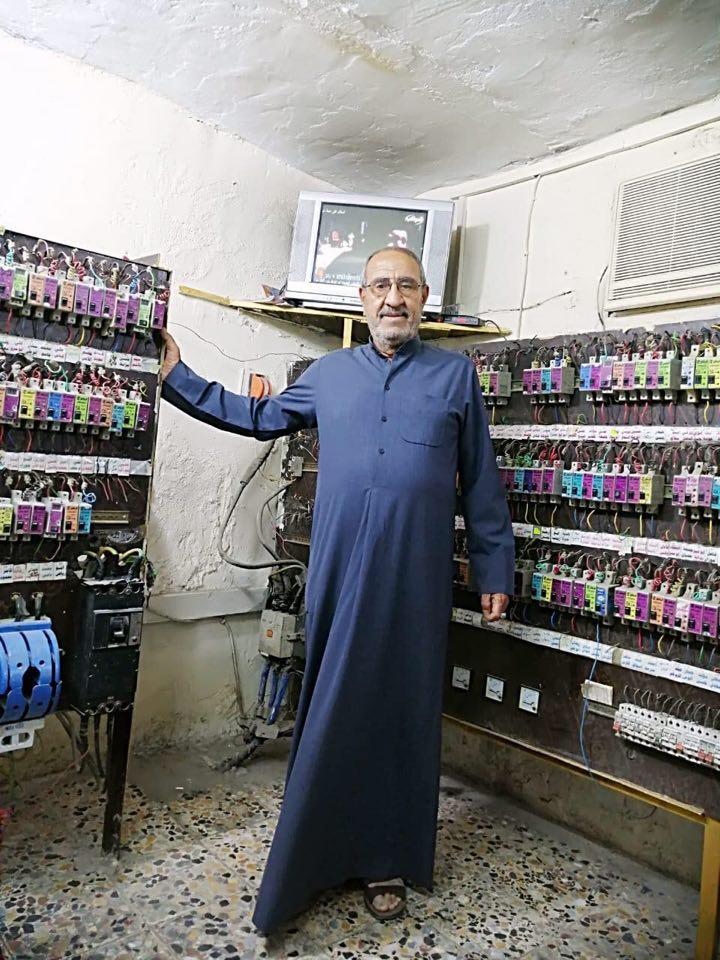 Daoud is a militant man who works as an electric power provider in Sadr City neighborhood in Baghdad.

Ali is an ambitious 33-year-old married man with two children. After completing his university studies, he decided to establish his own business, so he opened a shop to sell children's clothes

Shaima is a self-taught tailor from Hashimiya, who happens to be tied to a wheelchair from an early age.

Since a young age, Kassem dreamed of working in the field of fashion, cosmetics and fragrances.

Ahmed owned a small carpentry and furniture factory in Al-Hadi Street in Baghdad.

Hussein inherited the upholstery profession as well as his small shop from his father and grandfather.

We care about your health- Erbil

The primary goal of the campaigns carried out by our foundation and still existing is to prevent, as much as possible, the threat of Coronavirus to various segments of society. Yesterday, our campaign was targeting the security forces and the health sector to alleviate their suffering from those standing in the first line of prevention to confront the emerging corona virus. Today, our campaign targets orphans and the elderly, and from here we consider that the medical supplies distribution campaign carried out by the Cooperative Housing Foundation is a necessary thing to protect and prevent the threat of the emerging corona virus and to contribute to preventing its spread. Our fifth stop is Erbil Governorate, after coordination with the Department of Foreign International Relations and the Ministry of Labor and Social Affairs, orphanages and the elderly were nominated as the most deserving group and that needs special care in order to protect them and reduce the threat of Corona virus on them. The process of preparing personal necessities is considered one of the initiatives that enhance the spirit of community solidarity among the various segments of society, and it is the humanitarian duty of the Cooperative Housing Corporation and its keenness to be the main motivation for the implementation of this activity due to its importance in the present age. This work was covered in the media through the satellite channels: Kurdistan tv, Kurdsat, KTV, Zagros Tv In addition to social media

CHF Vitas Iraq continues its humanitarian work all over Iraq during the covid 19 pandemic. This week’s initiative went towards the police security forces and the health sector by distributing medical kits such as facial masks, gloves and infrared thermometers. This activity took place in several governorates including Baghdad, Babel, Najaf, Basra and Mudaina where the organization made sure to support and protect the heroes to confront the emerging corona virus (Covid-19) and to limit its spread. 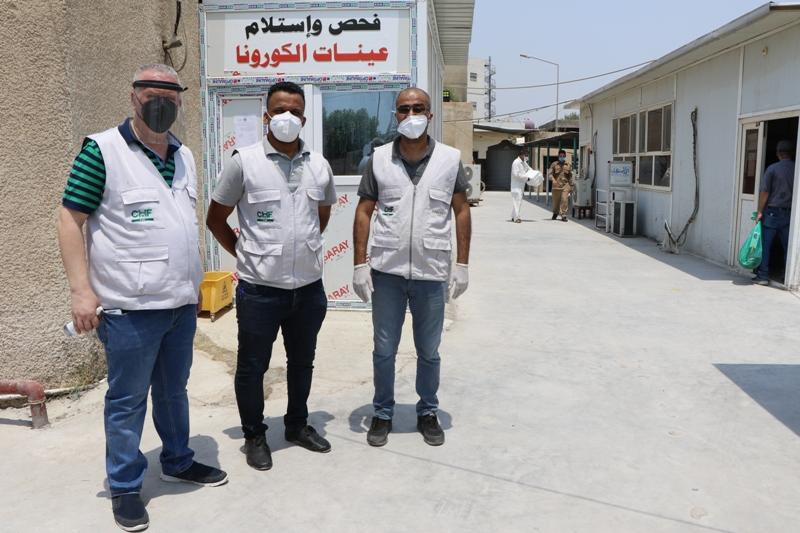 With the aim of providing support and assistance to health institutions during the Coronavirus pandemic, CHF Vitas Iraq has equipped a public health laboratory for examining people with Coronavirus with personal preventive medical supplies (protective suits, N95 masks, alcohol sterilization) and in coordination with the Babil Health Department. In addition to the humanitarian activities provided by the Foundation, and is still provided through sterilization campaigns and the distribution of supplies to hospitals and security services in various governorates to limit the spread of Corona. 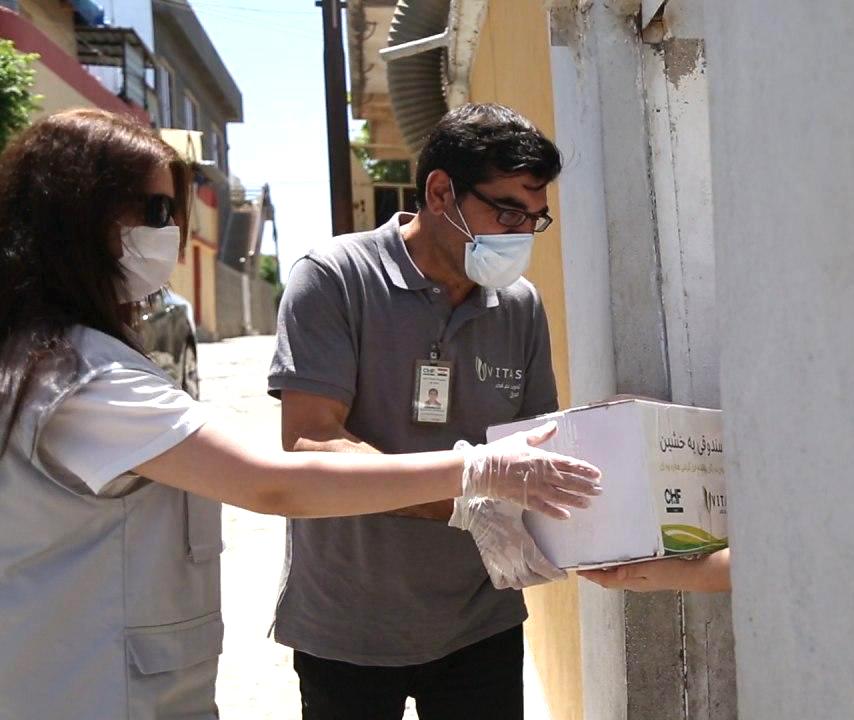 As Iraq is going through an economic and health crisis, CHF Vitas Iraq aims to offer support and advancement to the underserved low-income segments of the Iraqi society, by improving their life conditions and providing access to basic necessities including food. To support this cause, CHF Vitas Iraq carried out a humanitarian initiative by distributing 200 food baskets in Sulaymaniyah in coordination with the provincial government. This activity comes as part of CHF Vitas Iraq’s major response campaign against the virus, which features streets’ sterilization activities in several Iraqi cities, as well as equipping hospitals and emergency response units with the required medical essentials. 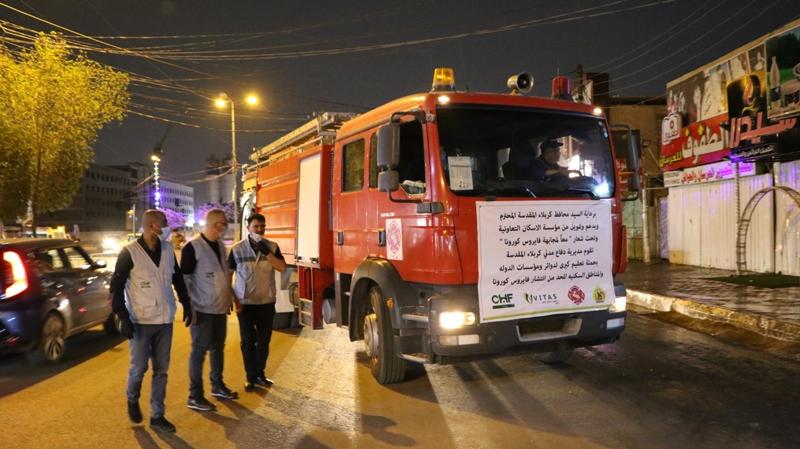 Disinfecting the Cities of Iraq

Within the framework of supporting the state’s efforts to limit the spread of coronavirus pandemic, CHF Vitas Iraq launched its major initiative to sterilize residential and commercial areas in all governorates of Iraq after prior coordination with the General Directorate of Civil Defense and the Crisis Cell in each governorate. Our organization has provided them with sterilization materials previously approved by specialists, specifically the CBRN team of the Civil Defense that specializes in epidemics. The campaign included the capital Baghdad, with its Al Karkh and Al Rusafa neighborhoods, Al Najaf governorate specifically the Old City, and the Holy city of Karbala including the Hindiya and Al-Hurr districts. Despite the risk, our team fearlessly entered areas with existing Coronavirus records and completed the mission during late-night hours, placing their national and humanitarian duty first.

" Dealing with CHF Vitas Iraq made me feel honored and supported. I am proud to be a loyal customer! "

" Thanks to CHF Vitas Iraq I was able to develop and grow my business. My family's quality of life improved significantly! "

" I wish continuous progress for CHF Vitas Iraq and its outstanding staff for what it offers to the people of the province. "

Check if you're eligible for a loan

The final eligibility decision is subject to a field assessment and evaluation of your business and situation by the CHF Vitas Iraq team.